It was important that the planning process for the Maui Nui DMAP examine each island individually when developing the actions for tourism recovery and rebuilding. Three steering committees comprised of members from the community, visitor industry, and other sectors from their respective islands came up with action items for the DMAP. It will be an action plan that will be used for the recovery and rebuilding of tourism. HTA and county tourism officials reviewed the committees’ action items to determine if they are executable and within HTA and county’s mandates. The draft DMAP for Maui and Molokai was approved by the HTA Board of Directors in December 2020 and the draft DMAP for Lanai in January 2021. Click here or the cover image below to view the plan. 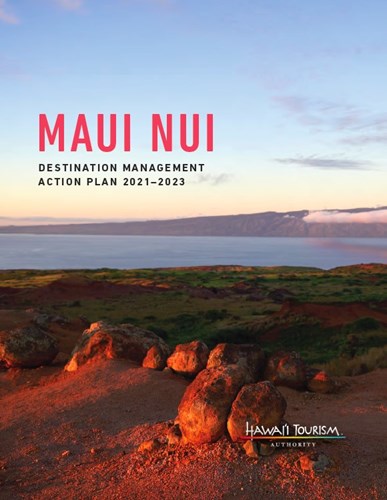 Maui Nui consists of three very unique islands: Maui, Molokai, and Lanai. Each has different community desires and values, but they all depend on tourism as an economic driver.

The COVID pandemic has significantly impacted the visitor industry in Hawaii. As of August 2020, Maui is down 70.9% in visitor arrivals and down 49.6% in air seats compared to the same time a year ago. Molokai experienced a 65.3% decrease in visitor arrivals, along with a 74.5% decline in visitor arrivals to Lanai. The County of Maui lost 22,000 jobs in the second quarter of 2020 alone. Of those jobs, Accommodations lost the most with 8,200 jobs, followed by Food Services and Drinking Places which lost 5,900 jobs, and Arts, Entertainment & Recreation which lost 2,000 jobs.

The second largest Hawaiian island, Maui (“the Valley Isle”) is popular with visitors looking for sophisticated diversions and amenities in the small towns and airy resorts spread throughout the island. From the scenic slopes of country Maui to beaches that have repeatedly been voted among the best in the world, a visit to recharges the senses. The visitor industry generates 80% of the County’s economic activity and provides 75% of all private sector jobs on Maui. More than three million visitors came to Maui in 2019 resulting in 66,363 visitors on any given day compared to the resident population of 155,707 (30% of the de facto population). The overwhelming majority of visitors are from the U.S. along with a small cluster from Canada. In 2019, visitors spent a total of $5.13 billion on Maui.

Spanning only 141 square miles and a relatively small in population of approximately 2,830 (21% of the defacto population), Lanai is known for luxurious pampering, gourmet dining and unconventional outdoor activities. The residents cherish their community’s sense of ohana, their natural resources and their rural lifestyle, and honor their heritage by preserving archaeological and cultural sites. Forty-eight percent of jobs on Lanai are from the accommodation and food services. In 2019, visitors spent a total of $129 million on Lanai with 84,100 visitors. This equated to 738 visitors on any given day.

Molokai is home to the highest sea cliffs in the world along its northeast coast and Hawaii’s longest continuous fringing reef (28 miles) off Molokai’s southern coast. With a high percentage of its population being of Native Hawaiian ancestry, Molokai is a place where Hawaiian culture thrives. With a population of around 6,820 (10% of the defacto population), the people of Molokai continue to preserve their rural lifestyle and show a great respect and love of the land. In 2019, visitors spent a total of $36 million on Molokai with 63,035 visitors. This equated to 783 visitors on any given day. 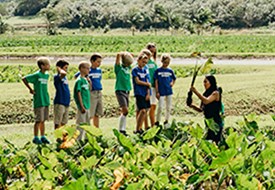 Members of the community, visitor industry, and other sectors to help identify actions.

The foundational documents and process in the creation of the Destination Management Action Plan.

More About the Plan

A status of the implementation of the Destination Management Action Plan.